In October of 1986, wearing a pair of orange overalls, “Farmer Mike” Valladao first stepped onto a stage at the world-famous Half Moon Bay Art & Pumpkin Festival with a knife in his hand. 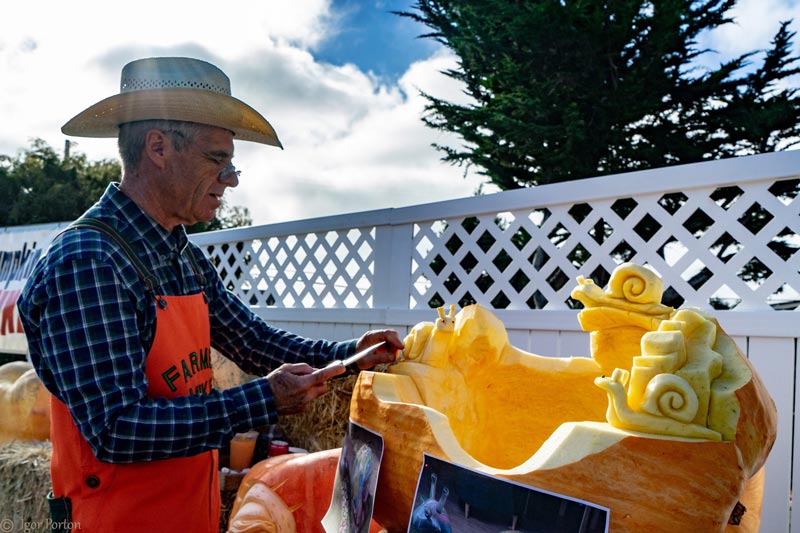 "I truly admire him," said festival committee member Kris Mason. "You have to have artistic imagination to do what he does. Anybody can carve a pumpkin, but he does more than carve. He sculpts."

Giant pumpkins were rare in those days, but having grown it from a seed, Mike knew this one well. He took advantage of the thick rind to create a three-dimensional face that amazed the crowds.

“I had never carved in public so that first festival was a bit of a stretch,” said Mike. “We weren’t sure people would want to take the time to watch a giant pumpkin being carved”.

Apparently they did. The nightly news picked it up. That led to national attention and even an appearance on The Tonight Show.

Today, Farmer Mike, “The Picasso of Pumpkin Carvers”, is known worldwide for his unparalleled carving skill and is one of the most popular and enduring festival traditions every year at the Pumpkin Festival.

His creations always draw a crowd. "I truly admire him," said festival committee member Kris Mason. "You have to have artistic imagination to do what he does. Anybody can carve a pumpkin, but he does more than carve. He sculpts." 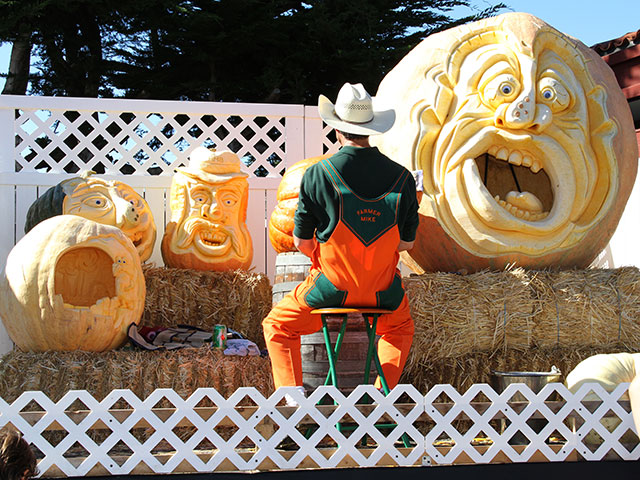 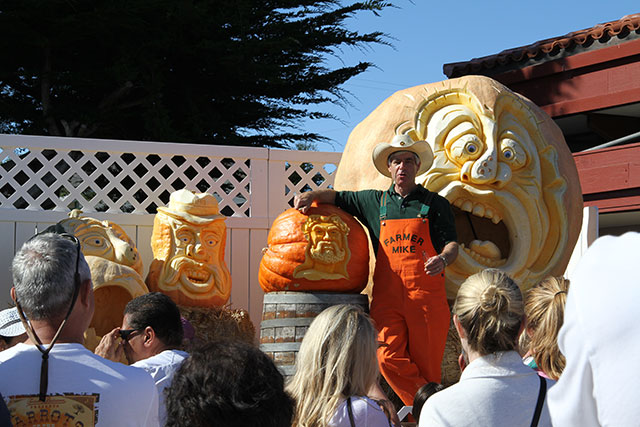 On his Pumpkin Festival stage, Farmer Mike has created whimsical faces, movie characters like MEGAMIND, the Wells Fargo stage coach, Puff the Magic Dragon, and even enshrined Pigeon Point Light House into the shell of a pumpkin.

The Atlantic Giant variety of pumpkins he carves range in size from a hundred pounds to more than a half ton each. Most of the detail work is done using a folding Buck knife and a variety of simple chisels.

He typically carves two pumpkins a day during the festival and can be found at the Coastside County Water District lot at 766 Main Street, about the mid-point of the festival grounds.

Farmer Mike always mesmerizes festivalgoers with his amazing, skillful artistry. He’s a friendly and engaging chap, and is always happy to answer questions from festivalgoers interested in his craft.

Mike has deep roots on the Half Moon Bay coastside. His family came from the Azores over 150 years ago as farmers and opened the area’s first feed and seed store.

Outside of Half Moon Bay, Mike has demonstrated his carving talents at the State Fair of Texas, the San Diego Zoo and has been featured in Boys Life Magazine as well as the Old Farmer’s Almanac.

Get Social With Us!