The Half Moon Bay Art & Pumpkin Festival sparked the wild and crazy creative genius of Peter Hazel to design and make the biggest, heaviest pumpkin sculpture the world has ever seen. Even bigger than the whoppers that will win the annual Safeway World Championship Pumpkin Weigh-Off. It is a mosaic sculpture that measures 11 feet high, 12 feet long, and weighs 10,000 pounds. But, unlike other giant pumpkins, this one is made of steel, cement, and ceramic tile. 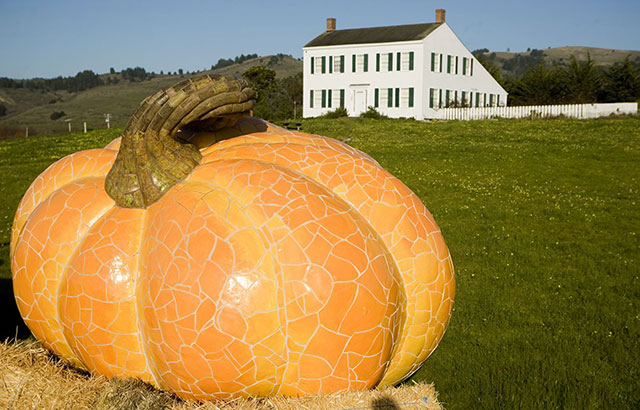 Half Moon Bay's Great Pumpkin, a 5-ton mosaic sculpture by artist Peter Hazel (photo by Steve Crawford)
“I didn’t want it to be fancy or cute,” says Hazel. “I really went all out for the beefy, burly, giant pumpkin look.” The pumpkin sculpture will be on display at the Half Moon Bay Art & Pumpkin Festival. Stop by to meet its creator! 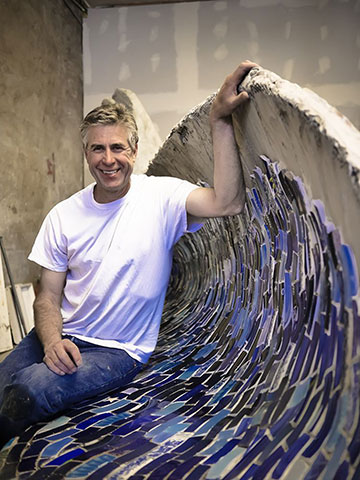 Lake Tahoe artist Peter Hazel was commissioned to create the giant pumpkin sculpture by Cameron Palmer, owner of Cameron’s Restaurant & Inn and also Pumpkin Festival Committee Chairman. Hazel grew up in Half Moon Bay and his father, Richard Hazel, was a local artist way back when the Pumpkin Festival was in its infancy. “We were at the first one, selling caramel apples,” says Peter Hazel. “It was a small, local gathering back then. We had no idea what the Pumpkin Festival would turn into.”

As an adult, Hazel moved to Kings Beach, CA, opened his own tile and granite company, raised his family, and never had time to pursue the artistic path of his father. But when his children were grown and the economy started to turn south, Hazel found himself with more time on his hands and a desire to explore his interest in sculpture. On a whim, he created a mosaic birdbath for some friends. They loved it and clamored for more.

Hazel decided to try something more daring –– a gigantic, mosaic sculpture of a brook trout, made entirely from thrift store ceramics. The trout soon found a home in a local restaurant in Lake Tahoe, and Hazel’s reputation as an artist and sculptor soared. He soon had another trout on display at Promontory Park in Greenly, CO, and was on the lookout for more artistic opportunities.

On a visit to Half Moon Bay in 2012, Hazel began chatting with Palmer at his restaurant. The conversation got around to Hazel’s artwork at which point he showed his portfolio to Palmer. One thing lead to another and the idea of the giant, mosaic pumpkin sculpture was born. “It’s only fitting for Half Moon Bay to have the world’s biggest pumpkin sculpture,” says Palmer. “Castroville has the Giant Artichoke … New York City has the Big Apple … Half Moon Bay should have the Great Pumpkin!”

Metal framework of rebar and mesh

Some of the hundreds of handmade orange tiles applied

Coating the framework with layer upon layer of reinforced concrete 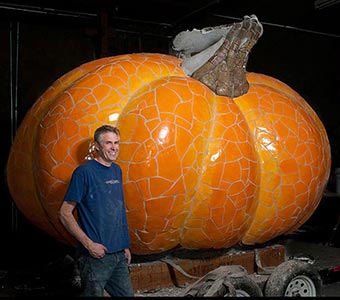 The artist with his massive mosaic sculpture (photo by Steve Crawford)

The sculpture began as a massive cage of rebar, then was coated with layer upon layer of reinforced concrete. Once Hazel achieved the shape he desired, he covered the 200-300 square feet of sculpture with ceramic tiles. Since orange is a difficult color to find, Hazel made all the tiles from scratch in his own kilns. The pumpkin is topped with a curling stem and leaves.

“I didn’t want it to be fancy or cute,” says Hazel. “I really went all out for the beefy, burly, giant pumpkin look.” The pumpkin sculpture is on permanent display in the parking lot at Cameron’s Pub, 1410 S. Cabrillo Highway in Half Moon Bay. Stop by this charming English pub to see this beautiful, one-of-a-kind, Godzilla gourd sculpture!